Liebherr American fridge freezers are supplied at the best price in the UK from Fridgepromotor. Liebherr's range of American style refrigeration consist of two separate units that connect together which makes delivery and installation much easier.The models with a water connection do not incorporate a drink dispenser but do have a built in ice maker. This style allows a bigger storage capacity as space is not lost by the large water dispensers. The Liebherr American style fridge freezers are far more energy efficient with some models boasting a A+++ rating.

If the ambient room temperature falls below 10 degrees centigrade the Liebherr American style referators may not work at its optimum level.

More information? Call 020 - 33 18 4691 or This email address is being protected from spambots. You need JavaScript enabled to view it. 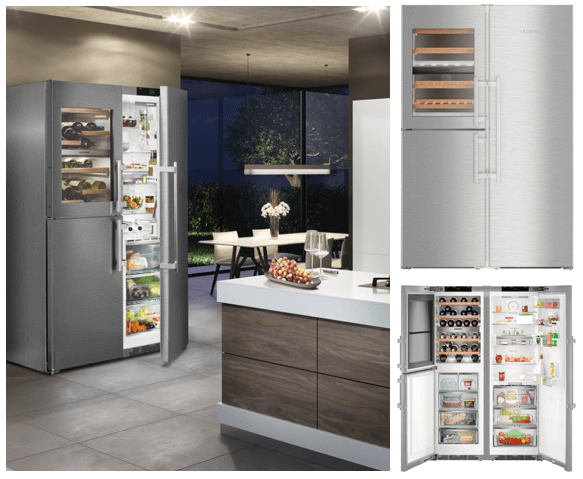 Before you buy a new American style fridge freezer, you should carefully consider how much space you actually need. It helps to ask whether the previous refrigerator was sufficient in terms of space or whether food had to be thrown away because there was simply no more space available. As expected, this problem is less pronounced with side by side refrigerators on our side than with conventional refrigerators. However, large families in particular should think twice about the required cooling and freezing space. Of course, it is always important to consider the space available for the American fridge freezer. After all, you don't enjoy the largest space if the fridge doesn't fit in your own kitchen.

The manufacturers often state the available space in liters, which does not help much when viewed realistically. A look at the inner refrigerator compartment structure helps more and is usually quick and easy thanks to high-resolution product photos from the manufacturers.

We already mentioned it earlier. Even the best refrigerator is useless if it doesn't fit in your own kitchen. A ruler, pen and paper should always be included when you plan your new fridge. For side-by-side refrigerators, make a note of the height available. This can easily be exceeded by refrigerators with American proportions.

In addition, you should also take into account the space required for the large double doors. How far these doors actually protrude is usually not specified in retail. However, you can at least roughly estimate this from the specified width of the refrigerator:
Fridge width from front / 2 = Approximate length of the doors.

Important note: Always allow for at least 2 cm additional space. Fridges often exceed the dimensions specified on the manufacturer's side, especially at the rear and on the front door. These are mostly arched and protrude clearly into the room. However, the manufacturer usually only measures at the shortest point.

You should consider a few things before buying a side by side or French door refrigerator and think about the following questions:

BioFresh
BioFresh keeps food fresh for longer Fresh, healthy food provides your body with everything it needs to function, in a natural way. Store your vitamin and mineral-rich foods at the ideal temperature and at the ideal humidity using our patented BioFresh technology, which keeps fruit and vegetables, meat, fish and dairy products fresh for much longer than conventional refrigeration technology.

DuoCooling
Accurate and independent temperature control of the refrigerator compartment and freezer compartment of combined fridge-freezers is achieved through DuoCooling with two completely separate cooling circuits. And there is no air exchange between the refrigerator and freezer compartment.
Drawers mounted on telescopic rails The drawers extend on smooth-running telescopic rails and can be conveniently removed at a door opening angle of 90°.

IceMaker
IceMaker with fixed water connection The plumbed-in IceMaker automatically keeps you topped up with the finest quality ice cubes so that you are prepared for every occasion.

LED
The BioFresh lighting with LED technology illuminates the BioFresh compartments of PremiumPlus models to give a perfect view of the stored food. The LED lighting is elegant in form and is integrated flush with the side wall.

NoFrost
Liebherr’s NoFrost appliances provide expert refrigeration technology to ensure long-term freshness. The food is frozen with chilled recirculating air, and any humidity is expelled. As a result, the freezer is always free of ice, and food no longer frosts over. NoFrost convenience makes defrosting a thing of the past.

One of the earliest forms of cooling was called 'ice house'. These ice houses were used all year round to store ice, usually cut ice from frozen lakes and rivers in winter. It was also known that Hebrews, Greeks and Romans used snow in storage pits and Egyptians placed pots at night to cool down.

The first form of artificial cooling was invented by William Cullen, a Scottish scientist. Cullen showed how the rapid heating of liquid can turn into gas and lead to cooling. This is the principle behind cooling that still exists. Cullen has never been able to put his theory into practice, but many were inspired by him.

Thomas Moore, an American businessman, created a cool box to cool dairy products for transportation. He called it a 'refrigiratory' until he patented a 'refrigerator' in 1803. In the early 19th century, more and more Americans moved to cities, increasing the distance between consumers and the source of food. The need for cooling was increasing.

Consumer demand for fresh food became a constant demand, leading to dietary changes between 1830 and the American Civil War of 1860. Along with strong economic growth and urbanization.

American inventor Jacob Perkins, who lived in London at the time, built the world's first working vapor compression cooling system. Ether was used in a closed cycle. His prototype system worked and was the first step towards modern American refrigerators. It was not yet a commercial breakthrough.

The first coolers were made by carpenters, designed to take advantage of the regular supply of large blocks of ice for household use. They were insulated wooden boxes lined with tin or zinc and used to store ice blocks to keep food cool. A drip tray collected the melt water - and had to be emptied daily. The popular use of ice cooling came to an end, as the use of natural ice caused health problems. This was caused by pollution and poor sewage. The solution was mechanically made ice.

The first household electric refrigerator was invented by the American Fred W. Wolf and was called the Domelre or the DOMestic ELectric REfrigerator. His model was a flop, but one of his innovations - the ice cube tray - caught on and was included in competitor models.

William C. Durant started the Frigidaire Company to mass produce refrigerators based on Alfred Mellowes' invention of a self-contained refrigerator, with a compressor on the bottom of the cabinet. Meanwhile, the Kelvinator Company introduced the first refrigerator with automatic control.

Electric refrigerators were not yet mass-produced and mainly owned by the wealthy. An electric refrigerator cost about USD 1,000. When sales prices started to fall, the market grew. Sales rose from 200,000 in 1926 to 1.5 million in 1935. In the mid-1930s, the number grew to about 6 million.

Swedish inventors Baltzar von Platen and Carl Munters introduce the absorption refrigerator, which is mass-produced by AB Arctic in 1923. Two years later, the company was taken over by Electrolux.

General Electric introduced the "Monitor-Top", the first refrigerator to be widely used - more than a million units were produced. The compressor that releases heat was placed on top of the refrigeration section. These refrigerators used sulfur dioxide or methyl formate as the coolant.

Up to 1929, refrigerators with vapor compression systems had caused several fatal accidents when the toxic gases leaked. Research was started to develop a less dangerous cooling method. This led to the arrival of Freon, which became the standard for almost all household refrigerators. The introduction of Freon played a major role in the spread of American refrigerators and regular refrigerators.

In an effort to prove that Munters and von Platen's design was potentially dangerous, Albert Einstein and Leó Szilárd patented the 'Einstein refrigerator'. The new design had no moving parts and operated under constant pressure using only a heat source.

Home freezers were introduced as separate compartments (larger than necessary only for ice cubes) as frozen foods, formerly a luxury item, became commonplace.

More than 80 percent of U.S. farms and more than 90 percent of urban homes had refrigerators. The focus was on design with new pastel colors such as turquoise and pink. Meanwhile, austerity was rampant in Britain and only 2 percent of households had refrigerators. In 1959 the economy started to grow and prosperity increased, bringing the number to 13 percent.

With the mass production of refrigerators in full swing, then Sandvik, in collaboration with customers, began to develop custom compressor valve materials to meet the industry's increasingly stringent requirements of chlorofluorocarbons in refrigeration sealed systems.

The environment became a top priority in the 1970s and 80s, with Freon being seen as a threat to the ozone layer.

The first energy labeling programs were launched, allowing consumers to compare the energy efficiency of products such as refrigerators.

Companies started to apply the Internet of Things to home appliances ... What's next in the development of Liebherr American fridge freezers?